The Museum of Toy Soldiers is much bigger than it initially appears and we felt it was well worth our time. Hesitant at first, and maybe a bit overwhelmed, we found the collections and displays interesting and intriguing. There was an eight year old boy visiting with his grandmother at the same time as we were and he was in his glory with all these little toy soldiers!

Throughout the rooms there are scenarios divided into 13 different collections. Many specialists and collectors have on display pieces manufactured as early as the nineteenth century and right up to the 2000s. They point out that each scenario is recreated as faithfully as possible, researching photographs, engravings, frescoes and even tapestries for the oldest of the scenarios.

The beginning of toy soldiers dates back to Egyptian times but became more popular around the 18th century, when Frederick the Great used miniature soldiers to map out battlefield strategies. Overall we found this an entertaining way to revisit historical moments in time. 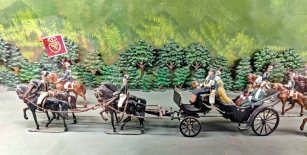 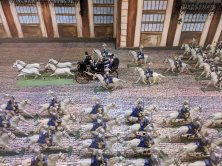 The visit of the President of the French Republic, R. Poincaré,to Madrid in 1913 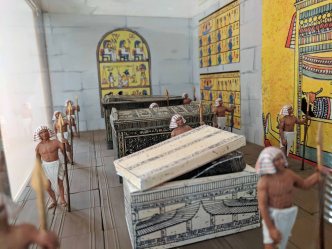