In August we celebrated our 6th month of full time travel, so we planned to relax and enjoy the beach life. However, by the third week we were itching for a new adventure. A perfect time for our first road trip.

We rented a small car (the smaller, the better when driving in and out of the narrow streets of these small towns) including a GPS navigator (thank goodness) and set off on a three day road trip. We drove through three provinces in Andalusia including Málaga, Córdoba and Jaén visiting a dozen small towns.

Andalusia is called an Autonomous Community made up of 8 provinces. Spain is made up of 17 autonomous communities and 2 autonomous cities. We are slowly beginning to understand this wonderful and complex country.
The name for a viewpoint in Spain is called a ‘mirador’. In general, miradors are worth stopping at for at least a couple of minutes. The few times we drove past a mirador and didn’t pull off the road, a hundred meters later, or as we turned the next corner, we would regret that decision.

The first sightings of these small towns from a mirador was always exciting and would definitely peak our interest to stop and explore them. Every town we visited had something special that we could recommend seeing but here are a few of our favorite finds.

Casares
Casares was our first hold-your-breath attempt at driving the extremely narrow streets of a small Andalusian village. We had to drive the entire length of the town before we found a parking spot. Casares is built on a steep hill making it difficult to see the layout and turns of the streets. We weren’t sure how we were going to find our way back out of town because we had entered on a one-way street. Luckily once we arrived at the castle ruins on top of the hill, we were able to look down and choose which street to use to exit the town.

The Casares castle is mostly ruins but we enjoyed rambling around the site. There were wonderful views above the town and out to the valley beyond. The cemetery was the most impressive. Everything was white with statues and vases of flowers at every grave.

This was the prettiest and most cheerful cemetery we have ever been to.

Genalguacil
Genalguacil is known as “the museum town” and walking through the streets is like walking through an art gallery. Every August, beginning in 1994, a dozen preselected artists arrive in Genalguacil to create and install their art. It was a hot afternoon the day we arrived and the heat may have slowed us down but it didn’t stop us from exploring this charming town.

Siesta is generally between 2-5 pm when shops close and the towns are absolutely still. Everything closes so there is no place to get a coffee or even buy a bottle of water. We had this quiet town to ourselves as we enjoyed the works of art, sculpture, murals and more spread about the streets, squares, rooftops and corners. We loved this art concept and spotted plenty of open spaces that hopefully will hold future art installations.

Ronda
This stop is our most memorable of the 3 day trip. The town of Ronda is built around the bridge ‘Puente Nuevo’ which rises 390 feet above the chocolate colored river, Rio Guadalevín. There are three bridges in Ronda but the Puente Nuevo, built in 1793, is the newest and most spectacular.

Ernest Hemingway’s book, “For Whom the Bell Tolls” refers to this bridge and to the beginnings of the Spanish civil war in 1936.
We stayed overnight at Hotel Ronda Moments, located 15 minutes by car outside of Ronda. The hotel is in the countryside and has a pool that was private and clean and built in the center of a field about 100 yards from the hotel. We drifted off to sleep to the sounds of cicadas.

The next morning we returned to Ronda and discovered a beautiful garden near the bridge where statues and pieces of art are installed throughout. It was a pleasant visual change to enjoy the trees and plants after absorbing the magnificent hardscape of the stone arches, bridges and massive rocky ravines.

Ardales – Bobastro Ruins
As much as we like the way the words ‘Bobastro Ruins’ roll off the tongue we actually found very little to see at this site.

According to the website there was more to view than what we found but apparently you need a guide and a map, neither of which were around. The gates were open so we set off on our own following the signs, each one explaining a portion of the history of the site. The site dates back to 899 AD. It is primitive and remains somewhat untouched. Regardless, it was a gorgeous day to be outside amongst the rocks and trees. We also discovered an impressive dam nearby.

Iznájar
We knew we were back in the province of Córdoba by the colorful flower pots decorating the walls in Iznájar. Iznájar is a classic “pueblo blanco” or white village, surrounded by acres and acres of olive trees covering every hill and nestled next to the prettiest turquoise reservoir.

The castle ruins are in the process of being renovated; the exterior walls are nearly completed and the towers within are slowly being worked on. We love seeing these historical sights being cared for, preserving them for the future. As with many of the white villages, Priego de Córdoba has been built high on a hill, offering fantastic views of the surrounding mountains and never-ending olive groves.

We stayed at Hotel Patria Chico, a charming little boutique hotel in the old quarter. Antiques were used to decorate both the public areas as well as the guest rooms. We had heard they had a good chef on staff and our romantic dinner in the back garden did not disappoint. It was excellent!

Alcaudete
After two very full days we were looking forward to our final day on the road. Alcaudete was our first destination. It is in the south-west corner of Jaén province, half an hour from the town of Jaén, less than one hour from Granada and Cordoba and barely two hours from Málaga and Seville. We only drove about 400 miles in our entire 3-day trip so nothing was really far.

We were able to visit one church in the center of town and then up the high hill we hiked to visit Calatrava Castle. The website said it opened at 10 am. When we arrived at 11 am the doors were still locked. Unable to get in we walked the perimeter once again enjoying the fantastic views beyond then headed back into town to find the tourist office. We were a little frustrated to find the tourist office also closed but a friendly local kindly called the castle’s phone number and arranged for us to visit. Back up the steep hill we climbed for a second time. This time the door was open and we were able to tour the site. Like many sites, they offer audio guides which provide good information, the history and often unique stories.

Alcalá la Real
We had planned to visit Alcalá la Real in July but the day we had booked our trip was the day our sinks backed up at our Airbnb in Granada. Our host offered to move us out to the beautiful little town of Monachil. (see our Monachil, Spain blog)

We are very thankful we added Alcalá la Real to this journey. The Fortress of La Mota, also known as Castillo de Alcalá la Real, is an amazing castle that is being restored in a very intelligent way. There are areas and battlements that have been rebuilt but just as many areas left as ruins so a visitor can see both the original beauty of the castle without losing the historical perspective. The castle sits strategically high on a hill providing visual communication with signal towers and, especially important in the middle ages, with the Kingdom of Granada. The audio guide was helpful in understanding the use of each of the buildings and ruins we visited.
Evidence of human occupation has been found in different sites on the hill since the Paleolithic and Bronze ages. Additionally the results of excavations have produced proof of early Roman occupation.
This is a large site with both archaeological digs and major rebuilding happening everywhere. It is one of the better sites we have visited. In addition to the castle, there is the Abbey Major Church, built in the early 1600s, restored in the 1700s then almost totally destroyed by the french troops in 1810 as they set fire to everything as they exited the city. Today it has been partially restored and it currently houses the Museum of Alcalá la Real.

El Caminito del Rey is a hike along the historical route to the El Chorro Power Station in Álora that starts at the dam of the Count of Guadalhorce Reservoir in Ardales. Part of the route involves a boardwalk that is attached high above the river to the rock walls of the Gaitanejo Gorge. The route is about 8 kilometers (5 miles) long including the 2.9 kilometer (1.5 mile) hike along the boardwalk. Sections of the boardwalk are just 1 meter wide, hanging up to 105 meters (345 feet high) above the river, on nearly vertical walls. Initially built in 1905, the walkway was completely redone in 2015 and should you want to walk this, you must make a reservation by purchasing tickets prior to visiting (http://www.caminitodelrey.info). Starting our journey we had read a little about this site but did not expect it to be as beautiful as it is. Luckily, we did not have tickets. Whew!
We saw countless amazing scenes and captivating countryside on our 3 day journey. By the time we returned to Málaga, our cup runneth over with all the wonderful experiences. It was an incredibly successful first road trip.
Salud from these roamers,
Ted & Julia

The town of Casares 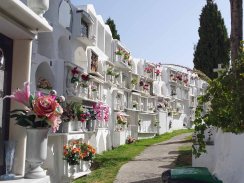 The cemetery of Casares

The cemetery of Casares 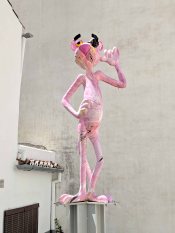 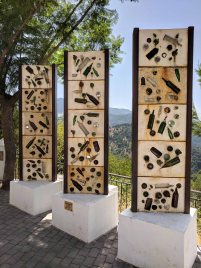 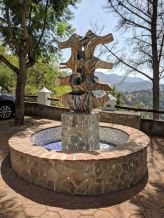 Sierra Bermeja After The Storm 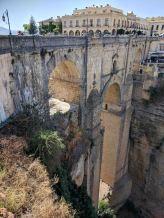 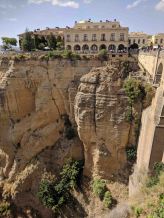 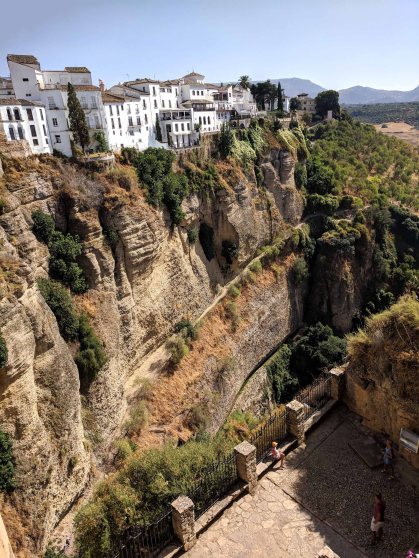 Gardens and walkways along the gorge

A Bridge (no longer used) over the Iznájar Reservoir

A view from Mirador del Postigo of the Iznájar Reservoir 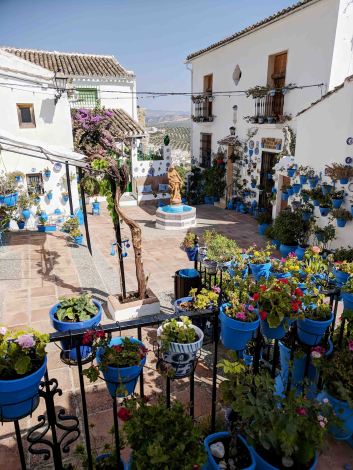 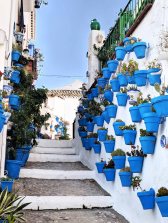 The Blue Pots of Iznájar

A view through a window 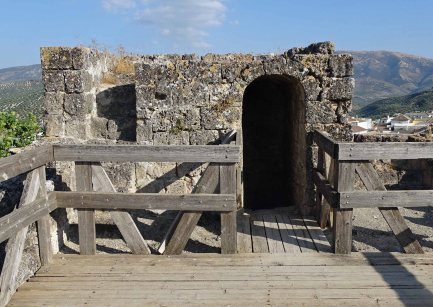 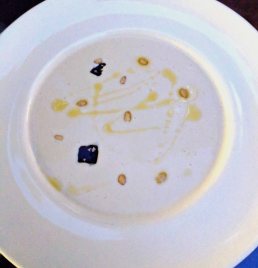 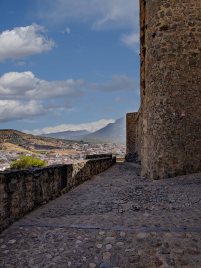 The exterior walkways of Calatravo Castle

The facade of the Iglesia de “Santa María la Mayor” 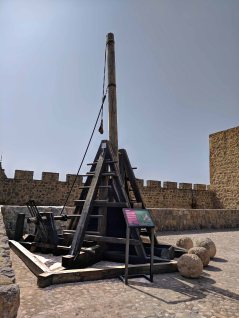 The battlements of Calatravo Castle 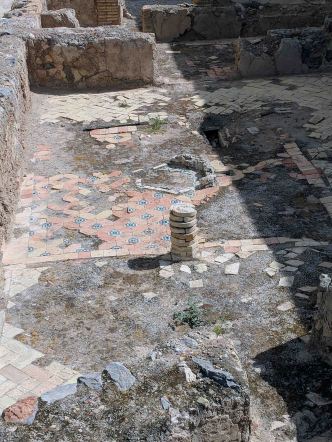 Remains of an ancient tiled floor 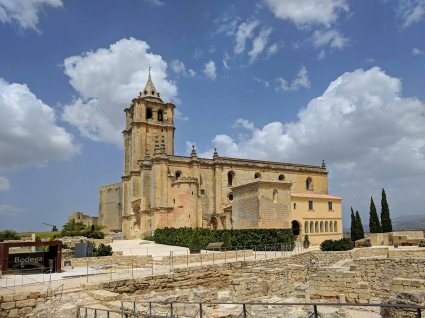 Crypts beneath the floor of the Mayor Abbey Church

The main plaza and ruins of the Fortaleza de la Mota

Wine Jars found beneath the Bodega

The boardwalk along the Gaitanejo Gorge

Visitors navigating the stairs of the boardwalk along the Gaitanejo Gorge

The boardwalk suspended 105 meters (345 feet) above the river

Amazing scenery with a wind farm in the distance 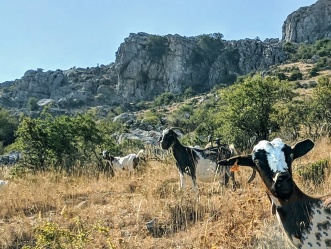 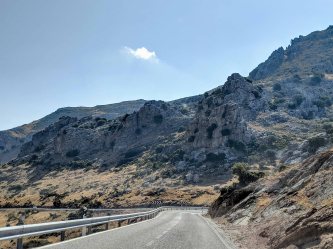 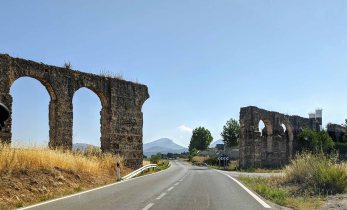 An ancient aqueduct as we left Ronda 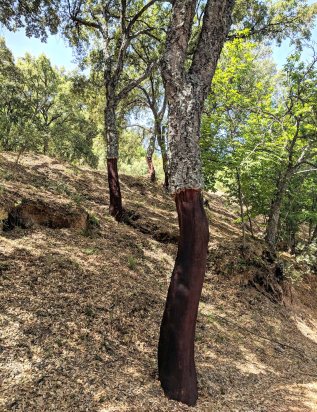 Cork trees that have had their bark harvested

Cork trees that have had their bark harvested 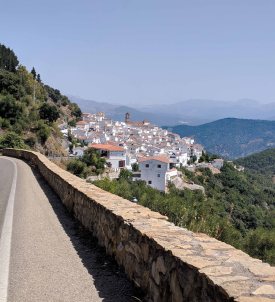 One more beautiful white village along the roadside