If you plan to visit the lovely city of Jerez, you may want to be here during the Fiestas de la Vendimia de Jerez, the Sherry Festival. When planning our travels months ago we read about this festival and, as we didn’t know that much about sherry or this region of Spain, we had to add it to our travel plans.

The weather is dipping back into the 80°s (F) (28°C+) which is perfect weather for exploring the numerous winery tours, tastings, food pairings and more. Tourist sites, bodegas (wineries) and tabancos (sherry bars) all participate in the festival offering sherry tastings. Even churches were handing out pamphlets referring you to various bars and tastings.
Our first tour was at Bodegas Lustau, where we were initiated into the world of sherry and sherry production and where we tasted our first ‘seco’, or dry, sherry. We actually tasted 3 variations of dry white sherry, 3 of dry dark sherry, 3 of sweet sherry, 1 sweet white Vermouth and 1 sweet red Vermouth. We left Bodegas Lustau knowing so much more than when we started.

Sherry is a fortified wine made from the white Palomino grape grown near Jerez. Sherry is produced in a variety of styles ranging from light dry versions similar to white table wines, called Fino and Manzanilla, to darker and heavier versions called Amontillado and Oloroso. Sweet dessert wines are made from the Moscatel or Pedro Ximénez grape. Cream sherry is made by blending dry sherry and sweet sherry together.
Sherry production is far different than wine making. It was fascinating to learn that each year only some of the contents of the oldest barrels (called ‘solera’) are removed and bottled for sale. Those barrels are then topped up with liquid from the second-oldest barrels (called ‘criaderas’), which are in turn topped up from the third-oldest criaderas and so on. This method, referred to as “running the scales”, creates consistency in the quality and flavor of the sherry from one year to the next and why you will not find the vintage on any bottles. No barrel is ever completely drained. We were told that in some bodegas, traces of sherry from 100 years ago can still be found in the oldest barrels.

Similar to champagne, at least in Europe, the name “sherry” is protected. All wine labeled as “sherry” must legally come from the Sherry Triangle, a small area between the towns of: Jerez de la Frontera, Sanlúcar de Barrameda, and El Puerto de Santa María. Of the three towns, Jerez is the capital of sherry production.
A few days later we toured the largest winery in Jerez, Bodegas Gonzalez-Byass, which is also commonly referred to as Tio Pepe. The information provided in the tour was similar to Bodegas Lustau, but due to the popularity of this bodega, the presentation was more commercialized and we felt we were hurried through the tour. Still, it was a worthwhile visit. We met a lovely couple from New Zealand and spent an enjoyable hour or so visiting with them during our tastings. At this bodega our tickets only included two white seco tastings. We did however purchase a couple of sweeter choices and found a new favorite pale cream sherry (a blend of dry Oloroso sherry and sweet Pedro Ximénez) produced under the name of ‘Croft Original Pale Cream Sherry’.

Instead of touring a third bodega, we opted instead for an evening of sherry tasting and food pairings being offered as part of the festival. The oldest bodega in Jerez, Bodegas Fundador, co-sponsored the event.
It was an outdoor event with long tables set up within the walls of the 11th century Alcazar. An amazing setting!

There were 5 small food dishes each served with an accompanying sherry. We were surprised by the pairings because, in our opinion, each savory food choice, wonderfully delicious by itself, was totally overpowered by the sherry served with it. The dessert offering however paired perfectly with Harvey’s Bristol Cream Sherry. Prior to our arrival in Jerez, we had only ever tasted sweet sherry and for years have enjoyed our favorite, Harvey’s Bristol Cream Sherry. Much to our surprise, although blended and bottled in Bristol, England since 1796, the wine and sherry from which it is made are all from estate vineyards here in Jerez and are part of the Fundador family.
During the sherry tasting we met a most interesting and delightful local couple, Pepe and Lola, who have been wonderfully gracious in sharing their time with us, showing us around this corner of Spain.
We were frequently told that, while it is important to tour the large bodegas, we should also plan to visit a tabanco or ‘sherry bar’. Tabancos often serve sherry from smaller producers, cooperatives and occasionally their own blend. Our very first foray out tasting sherry was a visit to Tabanco El Pasaje.

Walking through the door you are immediately hit with the wonderfully heady fragrance of the wines of Jerez. Most tabancos are quite small and each typically has a long bar along one side of the bar with patrons on one side and large stacked barrels, bottles, a kitchen and bartenders on the other. In El Pasaje the bar is made of dark wood and the bartenders uniquely write each patrons tab on the bar with white chalk. No wasted paper here.
When we visited Tabanco El Pasaje a glass of sherry ranged in price from 1.30€ – 2.50€ and a tapa from 2€ to 4€. There are a handful of tables but it was recommended we stand at the bar as most of the locals do. If you choose to sit at a table, we were told, you are committing to a full meal. During the sherry festival there are free flamenco shows daily so the bar gets very crowded, primarily with locals.
Jerez de la Frontera, or simply Jerez, dates back to the Moorish occupation in the 11th century and it was named “de la Frontera” because it was the frontier between the Moorish and the Christian kingdoms. Evidence of wine making in Spain dates as far back as 1100 BC, but it was the Moors, who invaded Spain in the 8th century, that introduced the technology required to fortify wine, creating sherry and brandy. By the 16th century, sherry was considered the finest wine in all of Europe.
Jerez is pronounced ‘hair-eth’. The Moors spelled it Xérès and pronounced it ‘sher-ish’. The English anglicized the name of the town where their favorite import was made and called this fortified wine ‘sherry’. In 1587 Sir Francis Drake was the first to introduce sherry to England and it has been a favorite import ever since.

Sherry, and the culture surrounding it, defines this beautiful region. We have sampled only a few of the local types of sherry and look forward to discovering many more. As we have said before, we thoroughly enjoy discovering, learning and exploring and this lifestyle seems to suit us perfectly.
Salud from the Jerezanos,
Ted & Julia

Casks of sherry at the Tabanco El Pasaje. We arrived just as they were starting a flamenco show.

A multi-level ‘Soleras’ at Bodegas Lustau made up of at least three levels (probably more) and potentially hundreds of casks in each level. In the aisle are two arroba-sized (a specific unit of measurement) pitchers that were used to carry sherry from one criadera to another in the days before pumps.

Wine tasting as part of the tour at Bodegas Lustau. The glass in the foreground is a brandy.

The tour train at Bodegas Gonzalez-Byass

Casks of sherry at Bodegas Gonzalez-Byass. The newer wine begins at the top (the criaderas). The oldest wine is in the kegs at the bottom (the solera). This is known as a “solera system”.

One of the many storerooms at Bodegas Gonzalez-Byass. In total over 100,000 barrels of wine, in different stages of production, are kept in the company warehouses.

A “transfer pump” used to extract the juice from the grape press and deposit it in the casks.

An antique Lepanto brandy still imported from France used to distill alcoholic spirits to be added to the sherry to create a fortified wine.

The 16,500 liter royal cask dedicated to, and reserved for, Queen Isabel II. 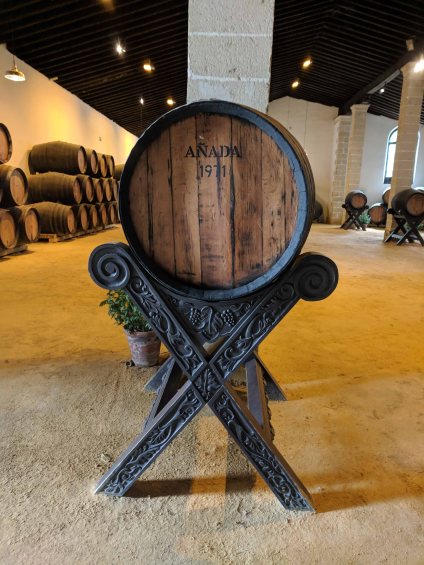 An Añada is a vintage sherry which is very unusual for the industry. This Añada was prepared in 1971. 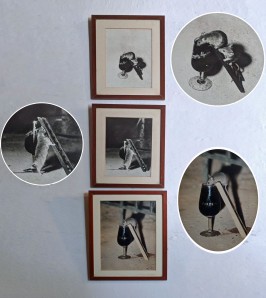 Pictures of a few mice enjoying a nip. (story below).

A bottle of Tio Pepe Fino, a style of Sherry that is aged entirely under flor (layer of yeast), and therefore not oxidized. Finos are dry, golden in color, and best served cold. 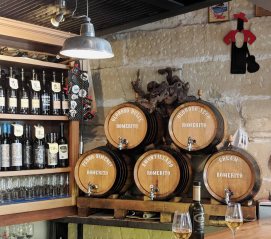 A local tabanco serving sherry from casks from the Bodegas Romerito

A few of the better Bodegas of Jerez

4 thoughts on “Celebrating Sherry in Jerez”