Everyone we know in Valencia has been telling us that we had to visit Albufera. Separated from the salty Mediterranean Sea by only a narrow strip of land, Albufera is a freshwater lagoon and estuary less than 7 miles south of the city of Valencia. An easy day trip by bus for 1,50 Euros each way.

Our day began with a 30 minute walk to the bus stop where we would catch our bus, then a 45 minute bus ride to the quiet little lakeside town of El Palmer. Once we arrived, our first stop was for a much needed cafe/coffee and our second stop was to find somewhere to rent a boat and operator. We were told that this was the preferred and best method to explore the Parc Natural de l’Albufera de València (“Valencia Albufera Natural Park”).
We arrived at the park early so we were easily able to secure a spot on a boat with just one other family. It was a leisurely trip around the lake and through the bulrushes reminding us of the Florida Everglades.
The park is a large shallow lake (52,200 acres) surrounded by rice fields. Though once a saltwater lagoon, by the seventeenth century, as rice farming gradually took hold, the lake was gradually converted to a freshwater lagoon. As an agricultural region Albufera is a valuable resource to Valencia and this part of Spain. The rice crops produced in the tracts and irrigated by the Albufera, are the most valuable crops produced in the province of Valencia. As a protected wetland of international importance Valencia Albufera Nature Reserve is a critical refuge where the rice paddies provide food and shelter for many species of migratory birds.

Another important use of the lagoon has traditionally been and continues to be, fishing. The clean waters of the lake provide for a great diversity and abundance of fish (“gambeta”, “petxinot”, etc). We tried gambeta and it is a delicious and tender white fish. Right up through to the 20th century the fishermen of the area lived in white huts that initially reminded us of the Polynesian huts we have seen elsewhere in our travels. These Valencian houses, called “barracas”, were made of mud, straw and reeds then covered with a white lime mixture. Interestingly this white mixture was said to also ward off insects. The upstairs was used to store crops and possibly hold an “andana” to breed silkworms.

The local dish, paella, is so prevalent in Albufera, (and in Valencia) that nearly every restaurant ‘specializes’ in paella and there were plenty of restaurants. The Spanish word for rice is ‘arroz’. Today we noticed a new word for a restaurant, an “arroceria” where, clearly, rice dishes dominate the menu. We found the majority of restaurants were in the town square but the one that caught our eye was a few blocks over and had won “Best Paella” each year for the last four years. How can you go wrong choosing that restaurant?
So, as the saying goes, when in Rome ….. (try the paella!)
We thoroughly enjoyed a leisurely lunch, including paella of course, where we sat outside in the warm sun being entertained by a dozen or more herons and egrets stalking fish in the rice fields. It was a lovely relaxing day, away from the hurried pace of the city.

Salut from these valencianos,

A felucca on display

Tour boats moored at the dock

Lots of ducks on the lake

A Grey Heron taking a rest 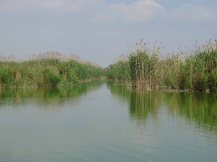 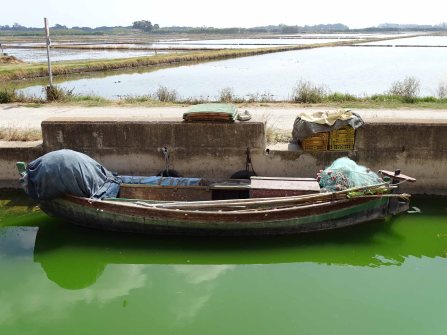 Working in the rice paddy

Paddy boats along the canal

Restaurants in the town square 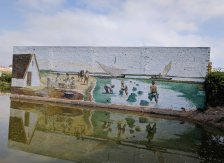 Fishermen on the lake 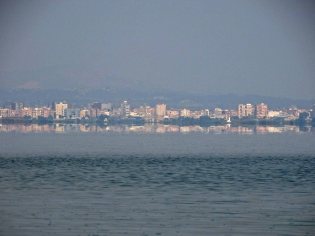 The Fish of Valencia

One thought on “Albufera Natural Park”