We cannot talk about our impressions of Lisbon without referring to the quaint single-car trams that speed up and down its hills. 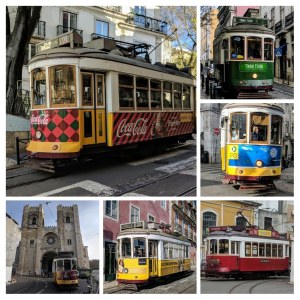 These delightful old trams date to the 1930s, and at nearly 100 years old, continue to play an important role in the transportation requirements of Lisbon. Some of the routes are completely unsuitable for modern trams, but these old beauties can easily manage the steep gradients and numerous tight corners.

Museu da Carris
Carris, founded in 1872, is the transportation company in Lisbon. Carris currently operates all transportation in Lisbon, with the exception of the Metro. This includes Lisbon’s 1,285 buses, 48 trams, 3 funiculars and the very unique Santa Justa elevator.

The Carris Museum’s layout begins with the history of the company followed by the creation of animal traction vehicles and then the funiculars and electric vehicles with all their added innovations through the years. There are a number of trams and buses on display, all in working order, as well as a reproduction of an employee medical center. There is a room of musical instruments used by the employee band, an identification card and ticket printing workshop plus multiple machinery workshops. One old double-decker bus made us laugh; it was painted in funky psychedelic 1960-70’s colors and even the seats were covered in the same bright pattern.

Vinho Verde
Most of us will have had red and white wine, but have you ever had a glass of ‘vinho verde’? (green wine)
Vinho Verde is not limited to a single grape variety but is rather a type of production from a specific region in northern Portugal. (similar to the protection guidelines around champagne and sherry). Neither are the grapes grown in typical rows. Many growers, especially in the past, would train and grow their vines high off the ground, up trees and telephone poles enabling them to cultivate their vegetable crops beneath the vines.
The name literally means “green wine” and the wine is released 3-6 months after harvesting the grapes. The grapes may be red or rosé but most often are white and the wine is typically consumed soon after bottling. Originally the slight effervesce of the wine came from malolactic fermentation taking place in the bottle; something you would normally try to avoid as a wine producer. However, consumers liked the slight fizz and this type of wine became popular. Today most producers add a small amount of artificial carbonation.

Museu Calouste Gulbenkian
The founder, Calouste Sarkis Gulbenkian (1869-1955) a British citizen, born in Turkey of Armenian parents, was a businessman and philanthropist. He played a significant role in opening up Iraqi oil development to the West. At his death, he had become one of the world’s wealthiest individuals and had acquired a private art collection of more than 6000 objets d’arte. In his will, he requested that the Calouste Gulbenkian Museum be built to showcase this collection and the Calouste Gulbenkian Foundation be created to promote art, science, education and charity throughout the world. The Calouste Gulbenkian Foundation, to this day, is one of Europe’s largest foundations.
The museum was founded in 1957 and opened in 1969 rotating and exhibiting approximately 1000 pieces from Gulbenkian’s own collection. His motto was “only the best”; and there are indeed many, many famous artist’s paintings represented, elegant sculptures, vivid manuscripts, gospels and hymn books ranging from the 13th to the 17th century, a room full of exquisite Lalique jewellery pieces from the turn of the 19th century and a couple of rooms full of exceptional renaissance furniture and decorative arts. We also viewed beautiful artwork from ancient Egypt, Mesopotamia, Persia and Armenia.
In addition to the masterpieces created by Rene Lalique, we were astounded by the amazing quality of the Greek coin collection, circa 400 BC.

Museu Nacional do Azulejo
On a brisk and sunlit Saturday morning we chose to walk the 1.5 miles to pay a visit to the National Tile Museum. It is located in a magnificent, richly decorated former convent that was founded in 1509 by Queen D. Leonor.
The museum features ceramic tiles or azulejos from the 15th century forward telling the history of Portuguese tiles. We have seen a myriad of tile designs in many Spanish cities but Portuguese designs are quite different. Although many are multicolored, the majority of the tiles are blue and white.
Found on the top floor of the museum, our favorite discovery was a precious 75.5 foot (23-meter) panorama of blue and white tiles that depicted the cityscape of Lisbon before the 1755 Earthquake. The tiles were created in 1700 and are one of the only surviving visual aids of Old Lisbon before the ruinous earthquake. It was difficult to get a decent photo, but certainly worth visiting.

Symbols of Portugal
The first one that comes to mind is the charming bygone sight and sound of the whistling old gentleman cycling through the Alfama offering his knife sharpening skills each week. It would be great if more of our hosts would take advantage of these services as we have yet to find a sharp knife in any kitchen. Regardless, the sound of his cheerful whistle always brought a smile.
The second is sardines. Definitely a symbol you will see in every tourist shop in town, but we wanted to also mention that the Portuguese have elevated canned fish to an art form. There are specialty shops that exclusively sell varieties of canned fish and of course every mercado, corner store and supermarket offers a selection. In addition to sardines we found canned cod, flounder, mackerel, mullet, mussels, octopus, salmon, squid, sea bream, sea bass, sole, swordfish, mussels, trout, tuna and a few more we couldn’t translate. Most are canned in olive oil, some smoked and some have added flavors like lemon, thyme, tomato and peppers. And no bare cans here – every can comes wrapped in brightly colored packaging.

And we have to include the Galo de Barcelos (Rooster of Barcelos) which is another ubiquitous symbol that represents a legend of a dead rooster’s miraculous intervention in proving the innocence of a man who had been falsely accused and sentenced to hang. You can pick up one of these colorful reminders of Lisbon anywhere.

Then there is the armillary sphere, which is a spherical framework of rings, centered around a small globe symbolizing either the Earth or the Sun with the rings representing the lines of longitude and latitude. We kept spotting this interesting symbol on ships, buildings, museums and churches and it peaked our curiosity. We learned that during the reign of King Manuel I (1469-1521), was the time when Portugal built the world’s first global empire, which involved developing commerce with and inhabiting parts of India, Africa, China, Indonesia as well as discovering South America and Brazil. King Manuel I adopted the armillary sphere as his symbol to represent this vast empire and to this day, the armillary sphere remains on Portugal’s Flag.

In addition to the symbols of Portugal there are three sites that we thought were remarkable and wanted to include in this final posting of Lisbon.
Formerly a church, the National Pantheon is where a number of important Portuguese are buried. More than a few times we stopped at the outside terrace to take in the majestic view of the Tagus river, to check to see if or how many cruise ships were in port and generally enjoy the views of the city.

The Basílica de Estrela, with its twin towers and large dome, visible from almost anywhere in the city was a wonderful excursion on our second to last day. We had the church nearly to ourselves. After viewing the interior of the church we climbed the 116 steps to view the cleanest, prettiest and most spacious church rooftop we have found so far. The striking patterns of the gray, pink and yellow marble of the church floor are perfectly visible when viewed from the open dome far overhead.

The medieval Carmo Convent, founded in 1389, was significantly damaged in the 1755 earthquake. Now referred to as the Carmo Archaeological Museum the remaining pointed arches and pillars are a graceful acknowledgement to the past. The former nave and apse of the Carmo church is where an eclectic series of museum tombs, statues and objects are on display. These items date from early medieval times (12th century) to as far back as prehistoric times; excavated and dated to around 3500-1500 BC.

And so our time in southern Portugal is done; the scenes and sounds, tastes and views not to be forgotten.

One thought on “Obrigado Lisbon”