Barcelona has been in the news recently with demonstrations for and against Catalan separation and demonstrations regarding ‘overtourism’. We have focused our explorations primarily on beautiful southern Spain but despite the tensions in Barcelona, we wanted to make a brief stop in this north eastern city.

Barcelona’s population is approximately 1.6 million and they hosted nearly 9 million visitors in 2017. We visited in October and it was far, far more crowded than anywhere else we have been during even the busiest months of summer. Overtourism is a reality here and Barcelona is struggling to manage the crush of tourists.

We spent a short 2 ½ busy days touring a few key sites and we want to share our most memorable moments.

We arrived in Barcelona by train, dropped our luggage off at a hostel and headed out. Our first afternoon we planned to just walk, explore and get lost.  We discovered the last private residence designed by Antoni Gaudi, built between 1906 and 1912, called Casa Milà. It is also known as La Pedrera or “the stone quarry”, because of its unconventional rock-like appearance.

The next building we found, considered one of Gaudi’s masterpieces, is named Casa Batlló. It was colorful and architecturally interesting. The locals call it Casa dels ossos (House of Bones).

Unfortunately these UNESCO World Heritage Sites had long waiting lines to get inside and even outside on the streets there were so many tourists it was challenging to get a good picture.

Years ago, our daughter studied in Barcelona and she brought us back a wonderfully dark painting of the historical Gothic Quarter, or Barri Gòtic. We were delighted to recognize the location of our painting’s subject.

There are two parts to this UNESCO World Heritage Site. Park Güell is first and foremost a large and lovely free-access city park with plenty of trees and flowers, gardens and pathways.

There is a fee however, if you want access to the Monumental Axis park that has Gaudí’s work in it. We arrived in the afternoon, stood in line for 20 minutes for tickets and then explored the park until it was our allotted time to enter the Monumental Axis. Unfortunately the beautiful and infamous undulating bench was partially closed for reconstruction and the other half that was open had wall to wall people sitting on the bench, understandably, but this made it difficult to see the lovely patterns, colors and designs.

Although there are signs everywhere not to touch the monuments, people were climbing and sitting on them while friends and family took their photo. Again a few too many of us tourists here to really enjoy it for long. The Iguana sculpture was only briefly free of people when a security guard came by and told people to move away from the monument thereby allowing us to capture this photo. A minute later is was once again crowded with people.

Eusebi Güell purchased this large piece of land and planned to develop it into an upscale neighborhood similar to those he had seen in England so he chose the English spelling of Park Güell. Only 2 of the 60 homes planned were ever built along with Gaudi’s striking park.

Antoni Gaudí, a renowned architect, was given the contract to design the park. The park was built between 1900 and 1914 and was officially opened as a public park in 1926. Although Gaudi designed only the gardens and pathways, in 1906, he, along with his father and niece, moved into what is now known as the Gaudí House Museum. At the time it was the model home of Park Güell which had been designed by Gaudi’s friend, Francesc d’Assís Berenguer i Mestres.

The original old home, Casa Larrard, located on the property when Güell acquired it, was redesigned and Güell resided there for a time. A few years after Eusebi Güell’s death however his heirs sold Park Güell to the city. The Güell family home became a public school, as it remains to this day.

Gaudi also designed a mansion for his friend, Eusebi Güell. It was built between 1885-1900 and it is called Palau Güell although it is not located in Park Güell.

The Cathedral of the Holy Cross and Saint Eulalia also known as Barcelona Cathedral, is the seat of the Archbishop of Barcelona. This Gothic cathedral was begun on the foundations of previous churches in 1298 and completed in 1417.

The cathedral is dedicated to Eulalia of Barcelona, co-patron saint of Barcelona, a young virgin who, according to Catholic tradition, suffered martyrdom during Roman times in the city. The body of Saint Eulalia is entombed in the cathedral’s crypt. One unique feature of this church is that in the secluded cloister, an area called the ‘Well of the Geese’, are where 13 white geese are kept, meant to represent the age of Eulalia when she was martyred.

There is an elevator that takes visitors to the rooftop where you can get a closer look at the Cathedrals towers and the city from above. We particularly enjoyed the views of the skyline and the number of distinctive chapels poking up above all else.

Late one evening on our way home from dinner we spotted an interesting monument lit up in the distance. We immediately took a detour to get an up close look and discovered an impressive Arc de Triomf.

It was built as the main access gate for the 1888 Barcelona World Fair. On the stone sculpture in the front of the monument are carved the words ‘Barcelona rep les nacions’ or ‘Barcelona welcomes the nations’, in Catalan. We love finding these unexpected gems!

Antoni Gaudí’s remarkable Sagrada Familia church truly is a masterpiece in progress. Before entering the church we slowly walked the outside perimeter absorbing as much the architectural and design elements as we could and taking dozens of photographs from different angles. As wonderful and amazing as the exterior of the Sagrada Familia is, it is the interior of the church that is beyond compare.

Words are difficult to find to describe the interior. It is light and open and reminiscent of being surrounded by trees, nature and color. There is such a welcoming bright and harmonious spirit here that despite the many visitors it was peaceful and we spent hours inside this incomparable temple. It is places like these that lodge in your heart and in your memory.

In 1883, at the age of 31, Gaudi took over the design of the Sagrada Familia and worked on it for 43 years, until in 1926 when he was tragically hit by a Barcelona tram and died three days later. This statement is on the Sagrada Familia website and the description resonated with us, especially once you enter the temple.

“The Sagrada Familia is an international centre for spirituality which, in an exceptional setting, invites people of all backgrounds and faiths to share in a sense of life based on love, harmony, good, generosity and peace.” This official website is kept current with progress and photos if you are interested in learning more of this fascinating story. http://www.sagradafamilia.org

Current projections anticipate the Sagrada Família to be finished in 2026, in time for the 100th anniversary of Antoni Gaudí’s death. We certainly hope to return to see the finished project.

After visiting the Sagrada Familia we headed over to what was once a hospital, “Sant Pau, Recinte Modernista” were we spent a delightful afternoon wandering through the grounds, enjoying any buildings that were open and exploring the underground connecting tunnels.

The first Hospital de la Santa Creu i Sant Pau was built in 1401, making it one of Europe’s oldest hospital institutions. As Barcelona continued to grow along with advances in medicine, in 1901 officials decided it was time to construct a new hospital. The new hospital, the complex we visited, was designed by Lluís Domènech i Montaner and opened in 1930. In 2009 hospital operations were moved to new premises.

Restoration work was completed in 2014 and the Sant Pau, Recinte Modernista complex with the beautiful pavilions, was turned into a wonderful museum and cultural center. The Blood and Tissue Bank, the radiography department and the physical therapist department remain in some of the old buildings. What a beautiful setting to work in!

Montaner lived at the same time as Gaudí and although their styles are quite different, their use of color is similar and both are referred to as having a ‘modernisme’ style. Domènech i Montaner built two famous buildings that are collectively a UNESCO World Heritage Site. The Hospital de Sant Pau which we loved and the Palau de la Música Catalana (unfortunately time did not permit us to visit it).

Follow the link and you will see the gorgeous building, photos of the interior and especially of the ceiling.

In fairness we were not able to stay long enough to get a feel for Barcelona. There was so much we weren’t able to see during our short stay. When you travel too quickly there is little time to connect with the residents and discover a city’s secrets. Having said that, seeing the Sagrada Familia, learning what Antoni Gaudí, Lluís Domènech i Montaner and a handful of others created with their uniquely interesting architecture in the early 20th century, and the lasting effect is has had on Barcelona was, without a doubt, a thoroughly enriching experience.

Hasta luego, Barcelona. We hope to see you again.

Ironwork on the exterior of the Casa Milà 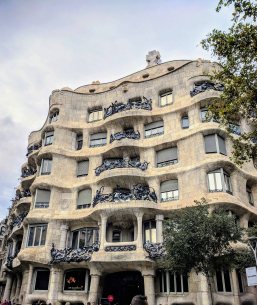 Sculpture of a submarine 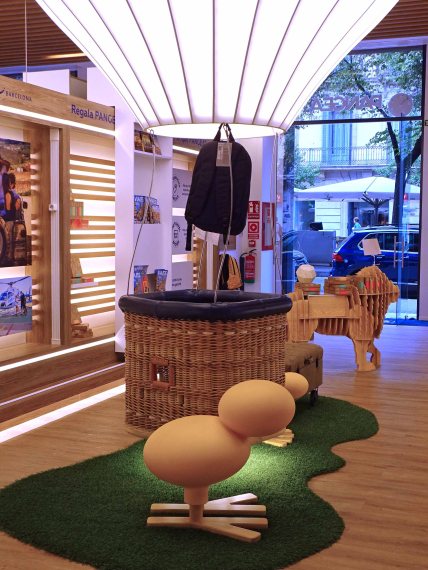 Two of the 13 geese kept at the cathedral.

The exterior of the benches we talked about at Park Güell 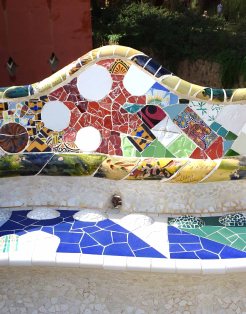 Detail of the beautiful mosaics on the benches at Park Güell

Detail of the beautiful mosaics on the benches at Park Güell

The most famous sculpture of the iguana at Park Güell 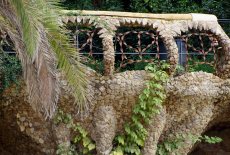 A railing along an upper patio 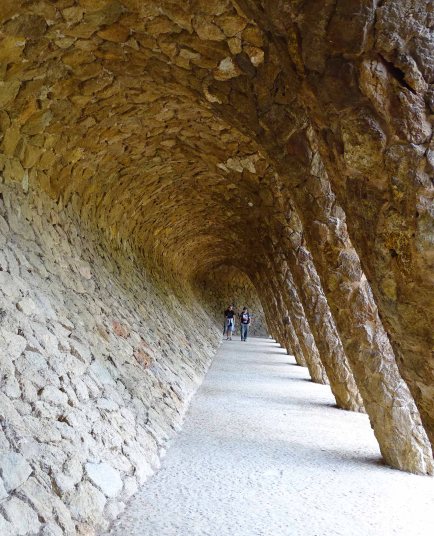 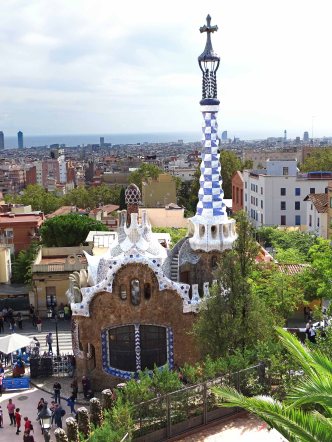 The main entrance to the hospital Sant Pau, Recinte Modernista 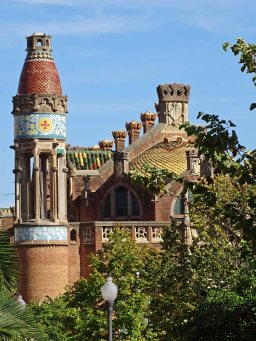 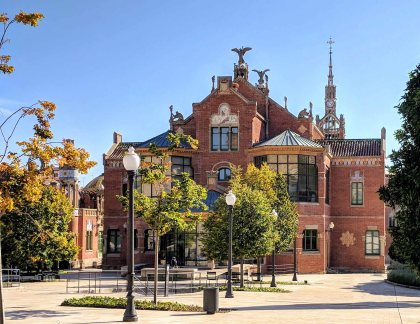 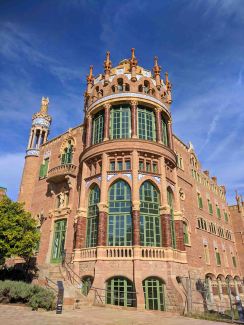 An example of what the hospital room would have looked like at Sant Pau, Recinte Modernista 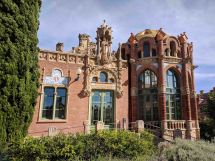 A model of the whole hospital as it was built.

A collage of two of the four doors of the “Façade of the Nativity of the Sagrada Familia”. 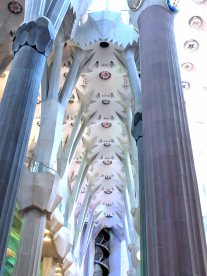 The main alter of the Sagrada Familia

Looking across the main alter 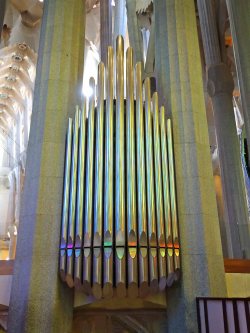 One half of the church organ

The stained glass windows of the apse follow a tonal degradation pattern. One side representing birth, the other passion. 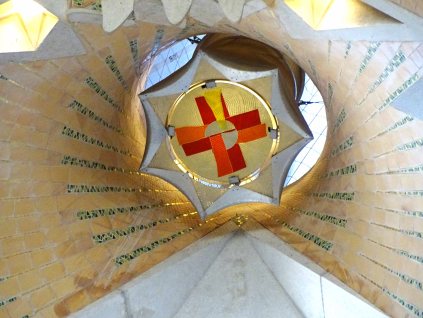 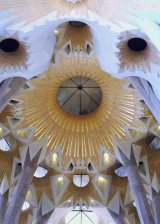 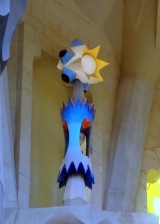 Interesting artwork is everywhere. This flower is sitting high above the nave on a balcony. 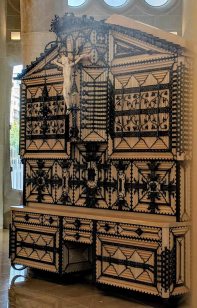 Interesting artwork is everywhere. This cabinet is in the sacristy.