The City of Wine Museum opened in 2016, and is an eye catching contemporary addition to the skyline of Bordeaux. The museum focuses on the many facets of wine throughout the ages, on a worldwide scale. In addition to the numerous interactive exhibitions, there are shows, movie projections and seminars on this theme.

Ticket prices are unusually steep although you can easily spend hours browsing, listening to and interacting with the exhibits. (Temperatures outside were hovering at 92°F/34C so we were happy to be inside.) Included in the ticket price is a self-guided audio device and one wine tasting from a selection of a dozen or so different wines from around the world. The wine tasting is on the 8th floor in a huge open room, (no seating available) called the Belvedere, where you can enjoy 360° views of the City of Bordeaux.

We learned in the 18th and 19th centuries, ships were believed to age wine faster, due to the constant rolling waters of the oceans.

We also learned about the mid-19th century ‘Great French Wine Blight’. Over 40% of french grape vines and vineyards were devastated. An aphid called a grape phylloxera, attacked the roots of the vine and proved to be fatal to the European varieties of wine, destroying many vines in France as well as other European countries. The aphid originated in the US and the american vines had developed resistance to them. After much trial and error, the only remedy that proved effective, was to graft french vines to the resistant american rootstock.

In one area of the museum you can watch videos filmed from a helicopter fly-over of 20 wine making regions in 17 countries around the world. We enjoyed seeing vineyards in the Okanagan Valley in British Columbia, another place we lived for a short time. 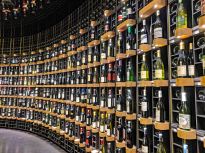 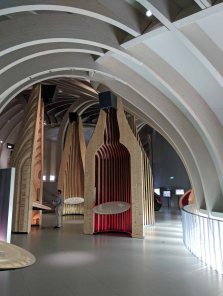 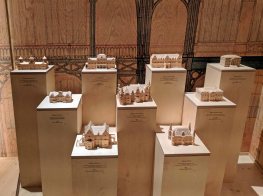 The colors of wine

The odors of wine