The Church of the Holy Cross was built in the late 11th century and is attached to an even older Benedictine abbey believed to have been founded around 450, on a rise of land, named Eau Bourde. The original abbey was destroyed around 730, then believed to have been rebuilt at the end of the same century.
We learned that in the middle ages church organs could be sold to, and melted down by, the army and this was the fate of the first church organ of Saint-Croix.

In 1730, the monks of St. Croix gave the church a new more imposing organ. Then in 1811 the archbishop requisitioned and transferred that organ to the larger more prestigious Cathedral Saint-André, where it stayed until 1970. That year, it was decided to return it to St. Croix. In the early 1990s, the buffet (the wooden portion that holds the pipes) was cleaned of the brown paint covering it to regain its original stunning silver and green. It is a magnificent organ.

The church was renovated in the 19th century and the former Benedictine Abbey is currently used as the home for the École des beaux-arts de Bordeaux. (School of Fine Arts)

Nave looking forward to the Apse

Nave looking backward to the organ 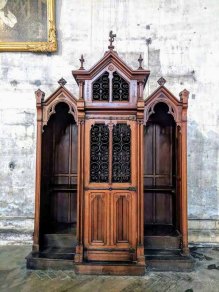 Alter in a side chapel