The Royal Seminary School of the Corpus Christi, fondly known by the Valencian people as ´The Patriarch´, began as a seminary. It is now a church and treasured museum. One unique feature is that this church has no door to the street. Since it was a private seminary there were no public services. The Seminary was built at the request of patriarch San Juan de Ribera in 1586 and takes up an entire block.

The interior of the church is similar to others we have seen in Valencia in that it is decorated by frescoes painted by a single artist. Bartolomé Matarana (1573-1605) a late renaissance painter active in Cuenca and Valencia worked for the Patriarch Juan de Ribera. In The Patriarca, Matarana painted not only the ceiling but all the walls as well. It is like walking into a painting.

In the Museum we found more beautiful paintings and an original manuscript entitled ‘The Sadness of Christ’, written by Sir Tomás Moro, during his imprisonment in the Tower of London just prior to his execution in 1535.

Perhaps our most unique find to date in a church was the stuffed alligator hung on the wall in the entrance at the Patriarca. There are numerous stories and legends based on this beast, including a storybook ‘El Dragon del Patriarca’. However the true story of this beast, “The dragon of the Patriarch”, is that it was a gift from the Viceroy of Peru sent to the Patriarch, San Juan de Ribera, who named the alligator “Lepanto”.  In the year 1606, when the alligator died, it was hung at the entrance of the temple as a symbol of silence. Thus, the saying “si parleu a la pancha vindreu”* is like a precedent to what the visitor had to keep inside that building: silence. 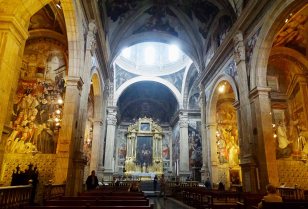 Nave of the Church of the Patriarch or Corpus Christi

San Vincent Ferrer in the Commitment of Caspe

Chapel of the Virgin of Antigua

Chapel of the Trinity or of All the Saints

The Biblia Sacra in the Museo del Patriarca. (read more below) 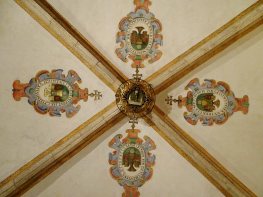 Ceiling decoration in the College of Corpus Christi

A gallery in the Museo del Patriarca

Monstrance in the Museo del Patriarca 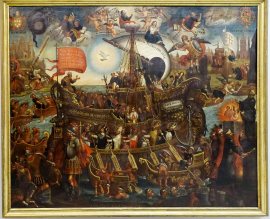 Mystical Ship of the Latin Church, 1740

Glory with all the saints

Sundial in the courtyard at the Colegio del Patriarca, Valencia, Spain 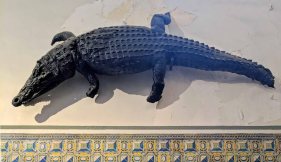 The Dragon of the Patriarch

El Dragon del Patriarca (The Dragon of the Patriarch)